Lately, living through the COVID-19 pandemic has us all thinking about how we affect each other’s health. After some researchers in China discovered traces of SARS-CoV-2 in the semen of several patients with COVID-19, professionals even considered marking the novel coronavirus as a sexually transmitted disease. Encouraging us to go beyond wearing masks to protect each other, our founder Dr. Evan Goldstein believes we should treat COVID-19 prevention just as seriously as we would an outbreak of sexually transmitted diseases in our communities.

“Diagnosing and treating STDs has always been an integral part of my practice at Bespoke Surgical,” says Dr. Evan Goldstein. “It is imperative, especially in these socially responsive times, to understand your status and make sure you’re consistent. Besides the appropriate testing and treatment algorithms, I advise my clients on preventative measures and medication one can utilize and take, respectively, prior to or just after completion of sexual play. After careful evaluation of the current situation with Covid-19, my position is consistent; we should rather continue to treat COVID-19 as we would any other STD. This means getting tested routinely – depending on your own risk exposures, as well as your partner(s). It shows responsibility and moral accountability when you keep in touch with everyone you’re engaging with not only about risk, but especially if you start to experience symptoms and/or if you test positive for Covid-19 after recently engaging in sexual activity. This notification allows you to take all precautions to avoid spreading the virus to others, just like any other STD in our communities.”

“My goal is to provide my patients with as much information as I can to help reduce the amount of risk involved for all parties,” he continues. “When you are educated on how you engage, I believe you can make informed decisions that positively impact not only your own health, but also the health of those you engage with and the community at large.”

That said, reading these studies got us thinking about the state of STDs in the United States. While it feels like every other health affliction is on the back burner for now, approximately 20 million new sexually transmitted infections occur every year, according to the CDC. How might we understand these numbers, and where do they come from?

To find out, we conducted a detailed analysis of STD awareness in the United States, using Google search data, CDC data, and information from Planned Parenthood. We looked at the most searched STDs in the U.S., the STD infection rate by state, and each state’s sexual education curriculum in order to get a holistic view of America’s understanding of STDs. Read on to learn more about what we found!

A Breakdown of the Most Common STDs

First, we narrowed down a list of the most common sexually transmitted infections using information from Planned Parenthood. Listed below is a description of each.

Next, we turned to Google to determine which STDs Americans are Googling the most – presumably because they are concerned about it or want to know more.

The Most Googled STDs in the United States According to Google search data from the last year, the most searched STDs in the U.S. include molluscum contagiosum, hepatitis B, chlamydia, genital warts, HPV, scabies, and herpes. The number one most-searched disease is hepatitis B, which was the most commonly searched in 17 states, including California, New York, Massachusetts, Washington. The second most-searched disease is molluscum contagiosum, which we bet you probably haven’t heard of until now! As it turns out, 13 states, such as Hawaii, Idaho, New Hampshire, and South Carolina, have been heavily Googling this disease over the last year. The good news is, even if those Google users were concerned about infection, the disease goes away on its own and is usually not dangerous.

Below, you can view a breakdown of the most Googled sexually transmitted diseases in the U.S. by disease instead of by state. Although the three most common STDs in the United States are HPV, chlamydia, and gonorrhea, Americans are much more interested in the less common disease highlighted above likely because many sexual education curriculums lack information on them or don’t cover them in detail. Since we find regional trends fascinating, next we decided to analyze the data through this lens.

Looking at Google search data is always fascinating in determining what Americans are interested in or concerned about. When it comes to STDs, it’s clear which are top of mind for them over the past year. Next, we decided to analyze CDC data in order to determine which states have the highest STD infection rates in the U.S.

The Highest STD Infection Rates in the U.S., State by State 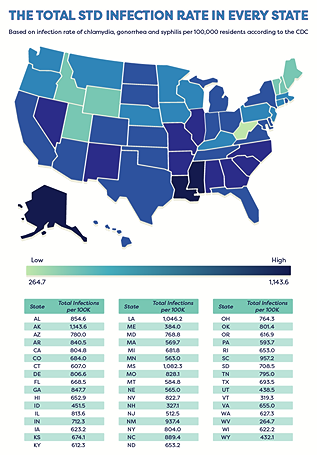 The CDC collects local information on chlamydia, gonorrhea, and syphilis cases across the country. We analyzed these numbers in order to determine the total infections of these common diseases per 100,000 residents in each state.

According to the data, the three states with the highest STD infection rates are Alaska, Mississippi, and Louisiana. Each of these states has a total of over 1,000 cases of infection per 100,000 residents. The states with the lowest STD infection rates are Maine, New Hampshire, Vermont, and West Virginia, each with less than 400 cases per 100,000 residents. Where does your state fall on the list?

Clearly, Americans are searching for all kinds of STDs in high numbers on Google, and the infection rate for the combined total of just three diseases alone hovers between 0.50% and 1% in most states. What contributes to a high STD infection rate?

According to the CDC, the STD infection rate has continued to rise in the United States for years. They attribute this to multiple factors:

One way to curb issues such as stigma and the lack of access to STD programs is to increase education around the topic. So, where do America’s schools stand on STD programming? To find out, we analyzed CDC reports on each state’s school-based health education laws. As you can see, the states that require the most information on sexual health be taught in their classrooms include California, Iowa, Nevada, North Carolina, Oregon, Rhode Island, Vermont, West Virginia, and Wisconsin. The states that have virtually no laws regulating sexual health curriculums include Alaska, Connecticut, Hawaii, Kansas, Kentucky, Missouri, Montana, Nebraska, North Dakota, and Wyoming.

It’s clear to most of us that more education allows us to make better choices. Based on this analysis of each state’s sex-ed curriculum, our natural next question was: does more sexual health education lead to less overall infections? We decided to see if there was a correlation.

While we cannot say that more education directly causes a lower STD infection rate, you can see in the graph above that there is a negative relationship between STD infection rate and higher-rated sexual health curriculums on a state level. This means that states that regulate their health education curriculums to include information on sexual health, STD prevention, and HIV prevention generally also have lower STD infection rates. This could be due to a combination of a number of factors: the education itself may encourage safer behavior in young people, but it also could suggest that more education may mean less stigma in that area.

Regardless of the developments of modern medicine, it’s clear to us that STDs are still wrapped in stigma, and local communities suffer from lack of programming and access to care. At Bespoke Surgical, it’s important to us to de-stigmatize the conversation around sex, healthcare, and the specific health needs of certain communities. Become a client today to learn more about our offerings, and visit a local clinic today to remain educated on your STD status.