What’s getting people in the mood in 2022? Maybe it’s a nibble of the lower lip. Perhaps it’s a level of confidence that’s indisputably sexy. Hell, maybe it’s a nude photo. We’re honestly not sure, but we felt a pressing need to find out.

We asked a diverse set of Americans about which gestures, personality traits, habits, sex positions, and pick up lines are feeding their sex drives most this year. We posed survey questions about a variety of turn-ons, both sexual and non-sexual, from nude photos and oral sex to saying “I love you” and being intellectually challenged. Further, we found out which pick up lines are turning Americans on and off. Read on to find out what’s turning people on in 2022!

The United States of Pick Up Lines The phrase, “compliments will get you everywhere” certainly rings true for Americans. When asked which type of pick up line turns them on most, residents in 27 states said compliments. While some Americans prefer praise, others prefer humor––residents in 14 states said jokes turn them on most. As long as the punch line isn’t overly cheesy, sign us up! The stragglers were a roast/flirty remark most popular in four states and a question most popular in one, lone state––Oregon. 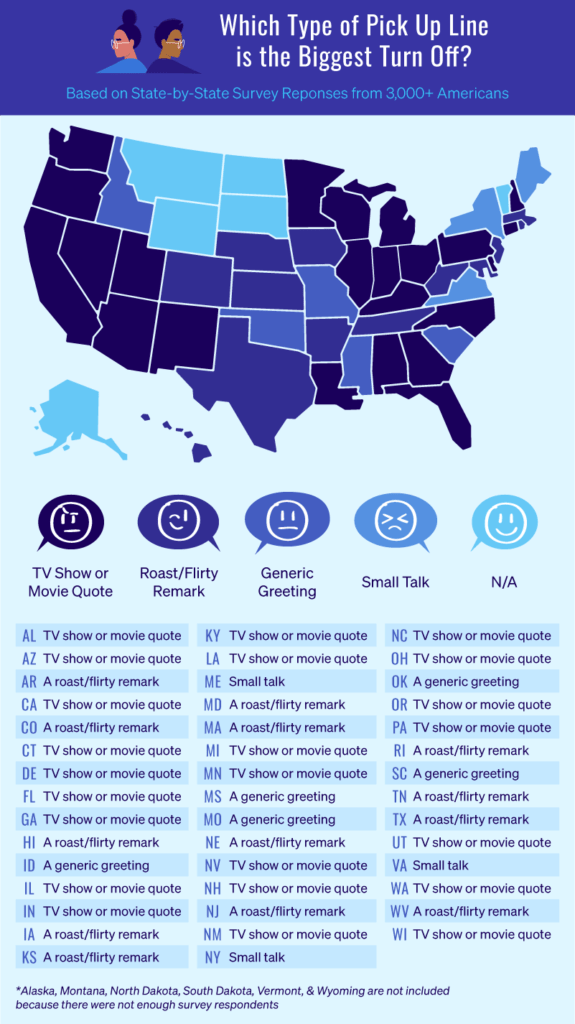 Which type of pick up lines scream, “get me out of here”? A TV show or movie quote is the biggest turn-off, according to residents in 23 states, followed by a roast/flirty remark (13 states), a generic greeting (five states), and small talk (three states). Moral of the story: Americans are growing weary of openers from “The Office” or the generic “hey.” Weather comments and saying “you look familiar” are also off-limits. Next, we selected some of our favorite pick up lines from the subreddit, r/pickuplines, and asked respondents which lines resonated with them most. Turns out that a simple, “Hey you’re beautiful. Can I take you to dinner?” works much better than cringey puns or “Titanic” quotes. Again, opt for genuine compliments over movie quotes or tired one-liners.

We opened up the floor to survey respondents, asking them to tell us the corniest pick up lines they have ever received or encountered. Here are a few of our favorites:

Next, we wanted to get a feel for turn-ons and turn-offs on dating apps and first dates. While the biggest dating app turn-ons were similar interests and sarcasm/humor in bios, the top three dating app turn-offs were 1) overly sexual photos or dirty jokes (29%), 2) hunting photos with deer or large fish (27%), and 3) heavily-filtered photos (25%).

Turn-offs certainly vary by gender, orientation, and age range. 46% of cis men are most turned off by heavily-filtered photos, but only 15% of cis women say the same. Straight respondents dislike overly sexual photos most, while gay or lesbian respondents appear most peeved by heavily filtered photos. Gen Zers and millennials can’t stand hunting or fishing photos.

The Anatomy of a Turn-On Which physical traits get the people going? According to respondents, the chest (27%), eyes (20%), and butt (18%) are the biggest physical turn-ons. In terms of active physical expressions, 42% of respondents said making out is the act that turns them on most, followed by snuggling (21%). In terms of passive physical expressions, 43% said smiling/smirking flirtatiously is the biggest turn-on, followed by playing with hair (23%) and making direct eye contact (21%).

Are Nude Photos a Turn-On? “Sexual wellbeing begins even before entering the bedroom, as the peak of our sexual pleasure follows a series of interactions between partners that are verbal, physical, or intangible. These interactions and cues are a part of our sexual preferences and routines whether consciously or subconsciously,” said Dr. Evan Goldstein, Sexual Health & Wellness Expert. “My goal is to continue de-stigmatizing discussions surrounding sex and relationships and these findings further assist our efforts. At Bespoke Surgical and Future Method, we pride ourselves on being an educational resource, while empowering everyone to have these important conversations unabashedly, especially within the LGBTQ+ community.”

So there it is––a nationwide analysis on what’s turning Americans on and off in 2022. In the spirit of having open conversations about our sexuality, hopefully, these insights inspire you to ask yourself and your romantic partner, “what turns you on most?”

Check out the Bespoke Surgical blog for more news and discussions with Dr. Evan Goldstein on sexual wellness.

We surveyed 3,050 people across the U.S. to uncover what’s turning Americans off and on in 2022. The survey ran from February 10th to 17th, 2022. The survey included a representative sample across gender, age groups, sexual orientation, and U.S. states in order to analyze insights by the different demographics and geographics included in the study. Alaska, Montana, North Dakota, South Dakota, Vermont, and Wyoming are not included in the state survey insights because there were not enough respondents available to complete the survey in these states.

The anus is not only our most valuable asset, but it’s also one of our...