The Average Number of Sexual Partners Across America

We’ve all gotten the question. You know, the one that makes you panic, squirm, and run quick mental calculations, hoping your answer is acceptable. What’s your number? And, no, we don’t mean your credit score. We’re talking about your number of sexual partners.

It isn’t easy to be honest about. Too many partners and you risk assumptions about your sexual freedom; too few, and you’re labeled a prude. At Bespoke Surgical, we know the only opinion that matters is your own, but we have to wonder: how truthful are Americans about the number of sexual partners they’ve had in their lifetime?

“Although we live in a time where many sexual taboos are diminishing, there is still a certain level of attention paid to the number of sexual partners one has had,” said Dr. Evan Goldstein, founder of Bespoke Surgical. “This study shows there is still stigma if a man has not had ‘enough’ partners, and stigma for a woman if she’s had ‘too many’, which are sexist stereotypes,” Dr. Goldstein explained.

Another gap is found between the straight and LGBTQ+ worlds. “Most straight people define a sexual partner purely by penetrative sex, while the LGBTQ+ community is much looser with their definition because penetration isn’t always the ultimate goal of sex,” Dr. Goldstein continued. “In reality, a person’s number of partners is irrelevant. As long as they are engaging safely with informed consent, there shouldn’t be shame associated with it.”

Read ahead to find the answer to popular questions like ‘what is the average body count?’. This survey was conducted as part of Bespoke Surgical’s survey series to examine America’s sex life. Check out related surveys like the Average Penis Size by State and more!

Note: Eight states did not receive a statistically significant number of respondents and were therefore excluded from the state-by-state survey insights. These states were Alaska, Delaware, Hawaii, Montana, North Dakota, Rhode Island, South Dakota, and Wyoming.

The States with the Highest and Lowest Number of Sexual Partners 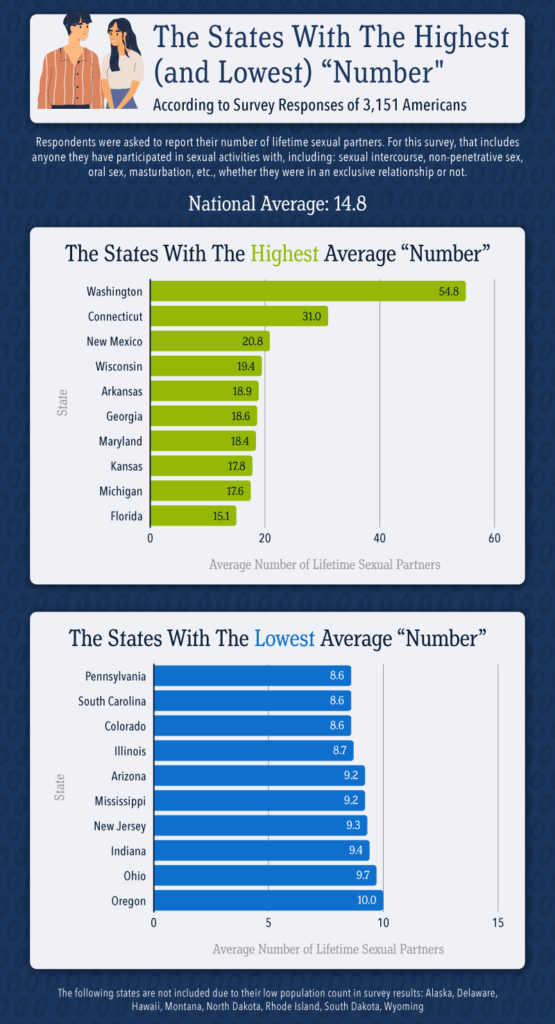 The national average number of sexual partners was 14.8 for the United States. Average sex partners by state was much more varied, however. When it comes to their number of sexual partners, Americans are all over the map—literally. Respondents in Washington, perhaps influenced by the state’s connection to grunge music and its exploration of personal freedom and what it means to be true to oneself, had the most sexual partners in the country, boasting a state average of 54.8—almost 24 partners higher than the number two state, Connecticut. With an average of 31 partners, the Nutmeg State seems to have outgrown its historically political and religious conservatism in favor of a more radical approach to life, as younger generations lean increasingly left. Other surprises among the states with the highest number of sexual partners include Georgia and Arkansas, traditionally classified as “Bible Belt” states, and Florida, where frankly it gets too hot to touch, let alone have sex.

At the lowest end of the ranking were Pennsylvania, South Carolina, and Colorado, with state averages of 8.6 sexual partners across a lifetime. This is less surprising in Pennsylvania, with its Quaker ancestry, and South Carolina, a Southern bastion of evangelicalism, but we expected a higher number in Colorado, where progressive politics and the good life loom large. These numbers vary wildly for the average sexual partners in a lifetime. So, just how honest are respondents actually being about their “number”?

Lying After Getting Laid 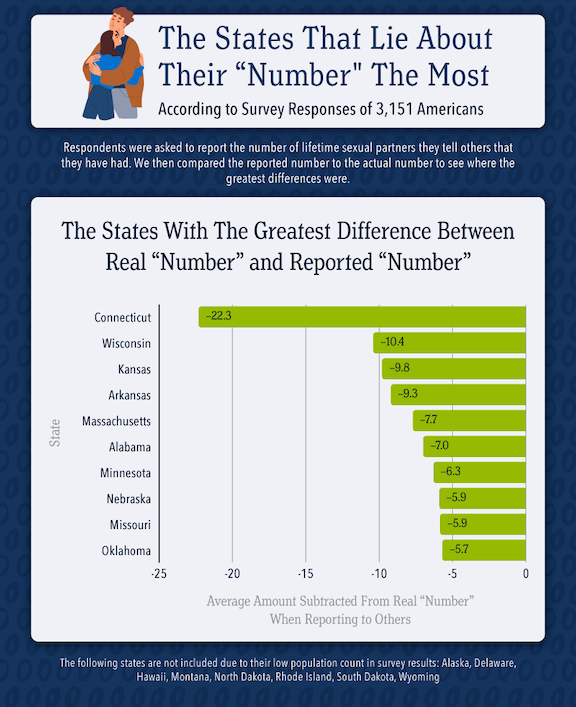 The jig is up! Americans aren’t being so honest about the number of people they’ve slept with, and some of them live in states with the highest numbers of sexual partners (looking at you, Connecticut). It seems respondents in Connecticut may feel freer to have sex than they do to talk about it, with a difference of 22.3 between the number of sexual partners they’ve actually had and the number they share with others. Wisconsin, Kansas, and Arkansas also ranked among those with the highest numbers, while none of the states with low averages reported high levels of truth-stretching. Overall, it seems like states with numbers lower than the average amount of sexual partners are less likely to lie. So, what accounts for this difference?

How Americans Feel About Their Average Body Count 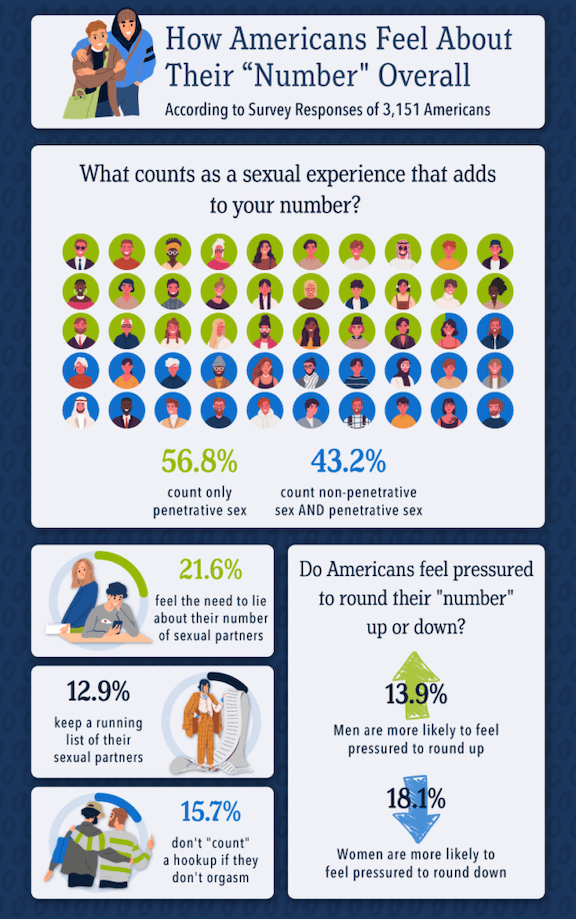 What Your Number Means for a Relationship 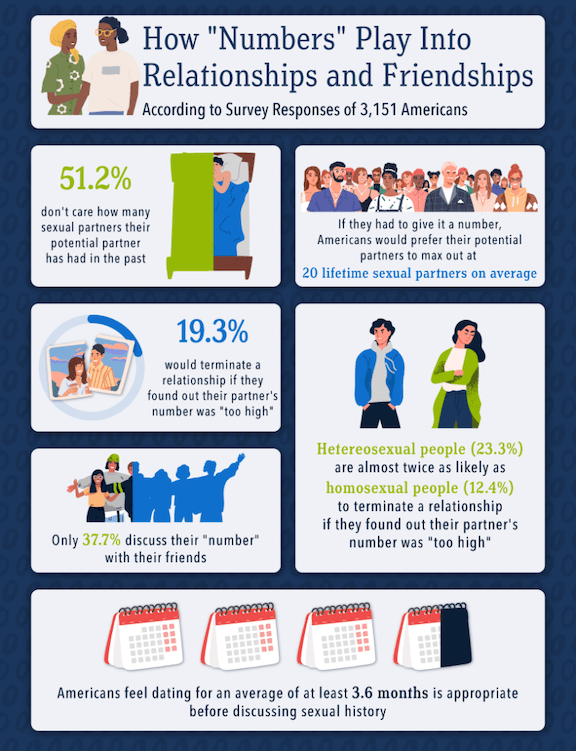 While over half of Americans (51.2%) don’t care about their partner’s sexual history, they may still have preferences. Overall, respondents would prefer a potential partner to cap their body count at 20. For others (almost 20% of Americans), a number that’s “too high” is grounds for ending a relationship; it’s worth noting that this is 10% more prevalent among heterosexual couples than homosexual couples. With such high stakes, it’s somewhat unsurprising that only 37.7% of people discuss their number with friends. The culprit for such discomfort, even among friends? Stigma. A number above the average body count can be viewed poorly by others. 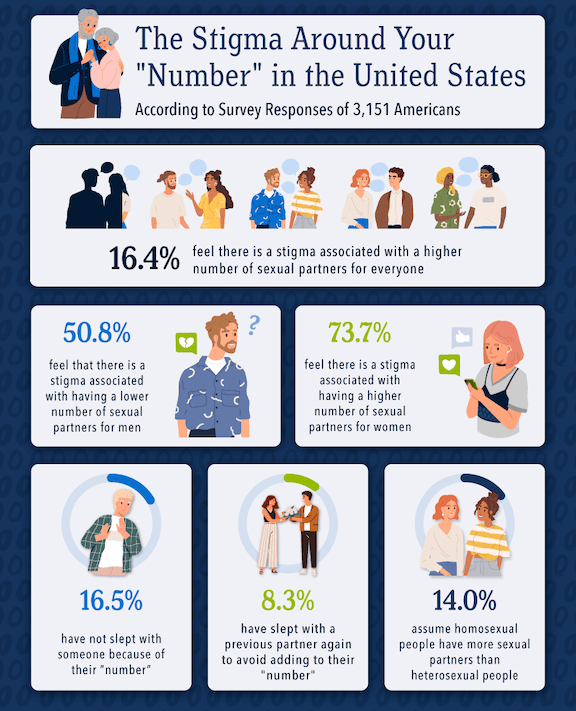 It’s 2021, and sexual stigma doesn’t seem to be going anywhere, especially when it comes to gender. While only 16.4% of survey respondents feel there is a stigma associated with a higher number of sexual partners, this number increases dramatically for women to a whopping 73.7%. Please, we beg you, let women have fun! Men, meanwhile, are stigmatized for having fewer sexual partners—over half of people (50.8%) say this stigma exists.

And sexual partner stigma doesn’t just happen across genders –it exists across sexualities as well. In fact, 14% of Americans assume that homosexual people have had more partners than heterosexual people. This stereotype about the hypersexuality of the gay community has deep roots and needs to be challenged. A part of it, though, may include how different sexualities (and even different generations) define sex. The gay community tends to count non-penetrative acts in their average amount of sexual partners while heterosexual couples are much less likely to. 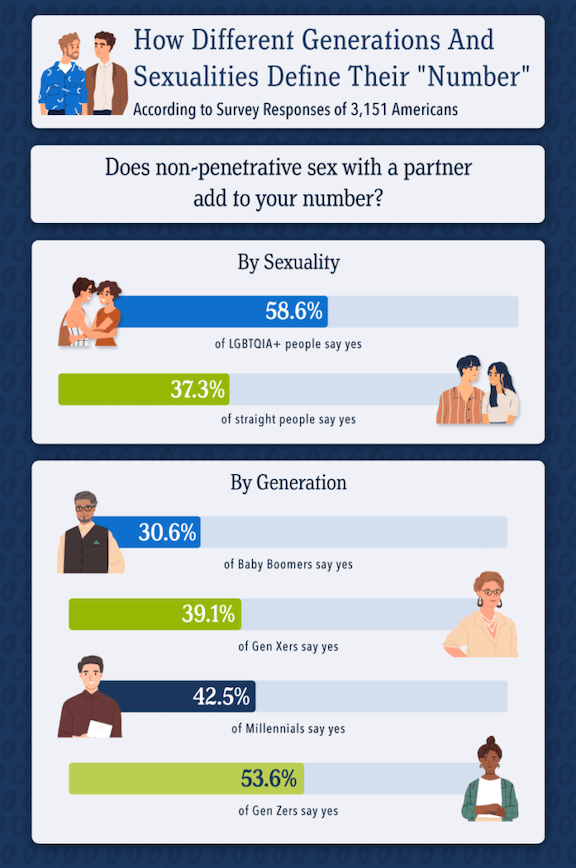 Folks in the LGBTQIA+ have a much looser definition of sex, as 58.6% if they count non-penetrative sex as experiences that add to their number, compared to only 37.3% of straight people. Perhaps it’s only logical that “numbers” would be higher in the queer community based on this. But what we didn’t expect was how younger generations are adopting this model as well.

Generation Z is the generation most likely to count non-penetrative sex as adding to their number, crossing over into a majority (53.6%). This definition of sex has gotten more popular with each generation, and now it seems to be more common than ever. We hope this means a more fluid, fulfilling, and empowering sex life for all.

Despite this, our survey responses show just how far-reaching this stigma around sexual partner numbers can be for everyone; body count can impact future relationships, sexual experiences, and a person’s willingness to meet and connect with new people. Whew, that’s a lot of significance to give to a number, don’t you think?