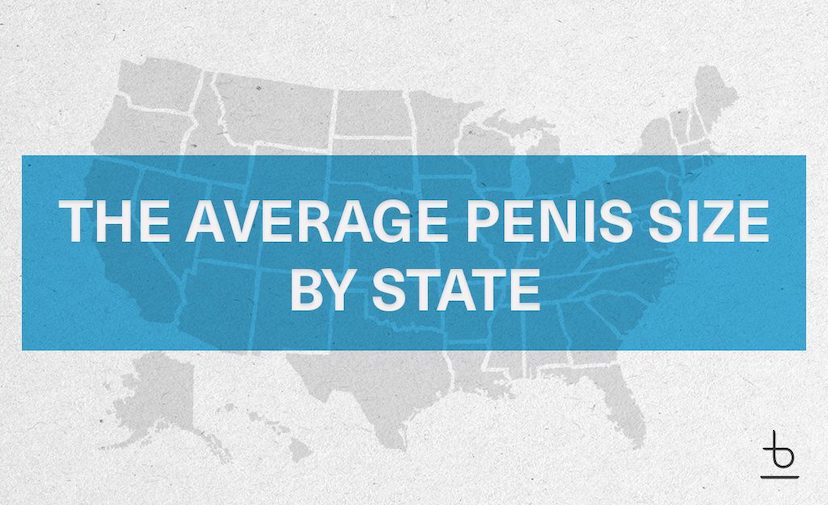 Let’s take a minute to talk about the penis. Here at Bespoke Surgical, we often talk about assholes, anal, and all things bottom (especially bottoming), but right now, we are going to focus on the other delightful part that’s just a few inches away. To us, there’s no such thing as a bad penis. You can be cut or uncut, have a slant or a curve, be a grower or a shower, be big or small, or even a little of everything in between, there’s one thing we can all agree on – every man should be proud of his penis.

However, the question of size is something that comes up frequently with women and men, both straight and LGBTQ+. There are countless jokes about size, overcompensating, and men vastly overstating their size to others. This often leads to a lot of misinformation as well as potential negative self-esteem issues, including worries about one’s penis being “too small”, which can lead to the desire to increase penis size. Our previous survey about how men and women feel about their genitalia has shown that feelings about one’s penis can impact daily confidence overall. This issue can be especially prevalent in the gay community. The reality is that we are all individuals and with that comes different characteristics, and those differences should be celebrated.

With this in mind, we were interested in finding the average penis size in each state, so we conducted a nationwide survey of just over 1,300 men. The twist? We asked two questions: What is your penis length at full erection and what length do you say your penis is at full erection when asked by potential partners, dates, or significant others? This data is not to shame any state or region but to instead gain insight on how different areas compare in both their reported size and what they tell others. Please bear in mind that this is all self-reported data and is based entirely on the responses provided by the subjects of the study.

Before We Start: The Actual Penis Length, Estimated

While we’ve conducted our own research below, we did want to pause a moment to talk about recent research. One 2020 research paper combined several previous studies to find the mean penis length. Their conclusion was that the average length of an erect penis is between 5.1 and 5.5 inches.

But why do so many sources say 6 inches if researchers say otherwise? Well, many penis size surveys may suffer from volunteer bias. Volunteer bias, in this case, could mean that men with longer penises might be more willing to volunteer for a length survey than men with shorter penises, which skews the data and makes the average seem longer than may actually be true. Alternatively, most surveys are self-reporting (like ours!) which gives respondents the opportunity to lie about the length of their penis.

Now that you have a frame of reference to keep in mind, let’s get to our own data!

Overall, what we found is that the average penis length varies significantly by state. The averages come in anywhere from 5.22 inches to a whopping 7.44 inches.

What Is the Average Penis Size in America?

The national (self-reported) average penis size in America came in at 6.41 inches at full erection. While there is room for error due to self-reporting, this still does give us an idea of the average penis length in the US men trend towards. 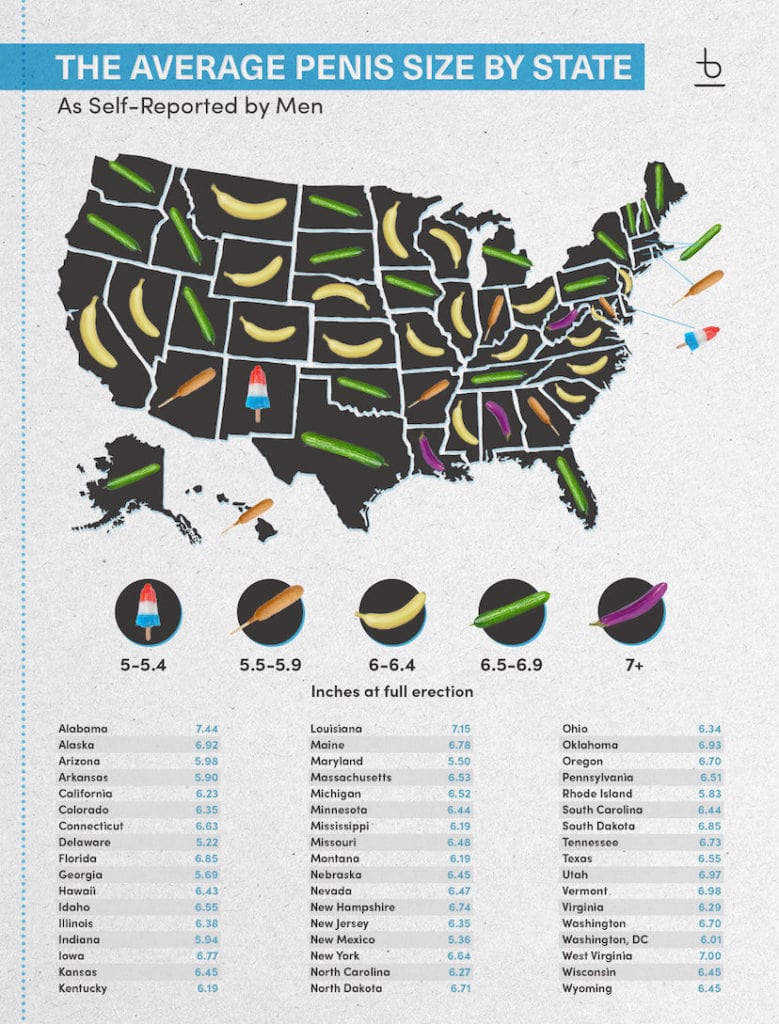 By How Much Do Men Exaggerate Their Penis Size?

As for the second question in our survey on what men tell others their size is, we found the results to be quite interesting as some states exaggerated while others understated their size. The national average for this question was 6.61 inches. 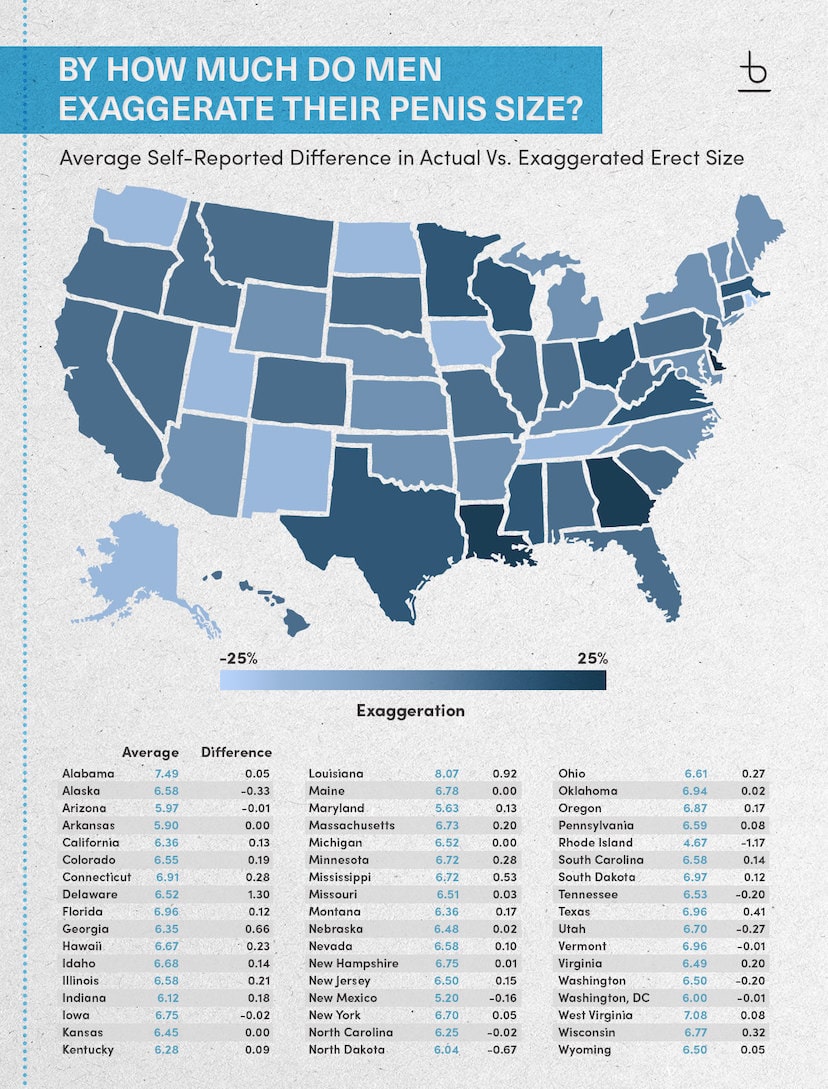 Surprisingly, we found was that twelve states had an understated average. Rhode Island respondents, on average, understated their size by 1.17 inches. Four states had the same average and the rest exaggerated their size. Interestingly, we didn’t see a pattern or correlation between states and the average penis size by state, though the deep south was guilty of the highest exaggerations. Aside from this, there was a significant variance throughout the country while attempting to answer the question,“what is the average penile length in the US?” 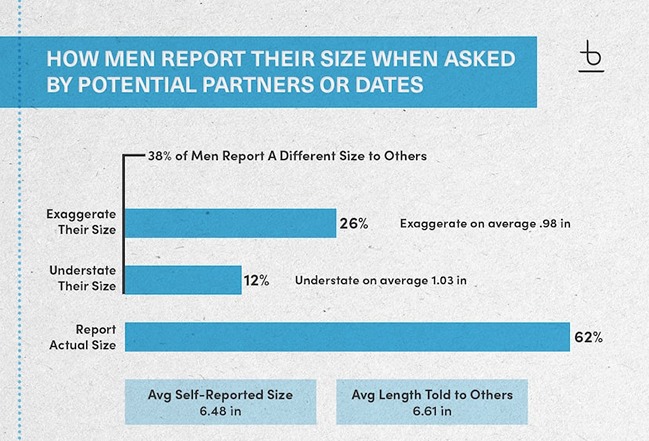 Digging deeper into the numbers, we found that, on average, 38% of men report a different size to others with 26% exaggerating by an average of 0.98 inches and 12% understating by an average of 1.03 inches. However, this means that the majority of men exercise honesty as a policy when divulging the size of their penis.

How to Measure Your Penis Accurately

After seeing this, you might be thinking about remeasuring your penis. If you are, here’s how to do it the right way!

Ideally, your penis should be erect for this. Stretching your penis is an inaccurate measurement. Follow the steps below:

In short (or long!), we found that penis size varies significantly throughout the United States. We feel that’s a great thing. Each person and each penis is different and that’s perfectly fine – don’t worry about “measuring up” to the average size penis in America. At Bespoke Surgical, we want to empower men to feel comfortable with their bodies and to use their penis to its fullest in a safe and healthy way. Healthy and fulfilling sex oftentimes starts with an individual and their own self-esteem. So, start loving your penis just the way it is. After all, size doesn’t matter – it’s all about how you use it. This survey is part of Bespoke Surgical sex research in the United States. Check out similar articles like the Most Popular Sex Positions By State. If you’re looking for tips and tricks on how to use any length (you know what we mean!) effectively, check out our guide on Why You Want To Try a Sex Pillow.